Home » News » Winners of all 3 Australian Women in Resources Awards

Winners of all 3 Australian Women in Resources Awards

Well done to all the nominees and winners from Australia!

We at WIM Community Portal Ltd are very glad these awards exist to celebrate women working in the mining sector and raising their profile!! Congratulations also to all the organisers and sponsors and for all those that made the effort to nominate outstanding women and male champions. Without your efforts this wouldn’t be possible.

On the 6th of March, Thursday, the NSW Minerals Council hosted the 2nd NSW Women in Mining Awards. The winners of the awards were:

The award was given for her tireless efforts to break down employment barriers and promote diversity in the NSW mining industry.

NSW Minerals Council CEO Stephen Galilee said that Cate has been promoting and implementing initiatives to improve diversity in the NSW mining industry for over eight years.

“She is the leading individual in indigenous affairs and engagement for Rio Tinto and for our industry and a most deserving winner,” Galilee said.

Cate’s work through the Aboriginal Community Development Fund supports school programmes in the Hunter and has seen young Aboriginal women strive for professional careers and emerge as strong representatives of their school and wider community.
Cate’s work, in conjunction with the Aboriginal Community Development fund has seen her support school programs in the Hunter Valley, to inspire and assist young Aboriginal women in achieving professional career goals to become strong representatives and positive role models for the wider community.

“I would like to thank the judges, this is a very brave move on their part,” Cate said.

“Giving me this award shows that they are looking at achievement and leadership in a broader sense, that they are not taking a narrow view of the award, that we can show real leadership in this industry without becoming a general manager or a leader of operations.”

It shows that you can be a leader and be recognised in any field, at any level of the business,” she said.

“This award recognises the commitment that Rio Tinto has made to a body of work that requires vision, time and patience to realise.

“I hope that my award will encourage and inspire to say that they too can demonstrate the qualities of leadership and passion and be recognised.

“I’m elated to win and I’m extremely proud that my work is being validated in this way… It feels fantastic to win this award, because it shows the value of the work that I have done and will keep doing for my company, the mining industry and the communities where we live and work.”

“Cate started her professional career in local government in 1988 and spent the better part of the next 10 years in a broad range of roles involving community development, community and youth services and Aboriginal relations in Western Australia, ACT, Queensland and NSW. She joined Coal & Allied and the mining industry in 2006 and has worked to increase collaboration between miners and the community in which they operate by engaging local organisations, the NSW Minerals Council and government bodies in the Closing the Gap agenda in the Upper Hunter Valley.”

The CME Women in Resources Awards recognises individuals and organisations working to build a world-class industry which provides attractive career opportunities and enhances the recognition and participation of women in the sector. You can find more information here.

The winners announced today are:

“The 2014 Outstanding Woman in Resources, Kyra Bonney, is a Guburn (Kupurn) woman from the Goldfields region of Western Australia.

Kyra completed a mining traineeship at the age of 19, as the only female Indigenous trainee to complete the course at that time.

“At the time I didn’t really think much of it, but looking back now I can see the importance.

“It’s opened up so many opportunities,” she said.

This lead to a 13-year career with large mining companies, as an operator and blast crew member on remote sites.

“Companies are really embracing women and really enforcing their policies around behaviours and attitudes in the mining industry. “I’ve seen a great change and shift from old-school mining to new-school mining,” she said.

Kyra’s passion to help other Indigenous people has let her to start her own business which focuses on closing the cultural gap between mining companies and Indigenous employees.

“I’m a role model for Indigenous people and I do a lots of workshopping with indigenous trainees who come on board in being able to find that balance between working life, personal life and balance between their culture and society.

“It’s about being able to give my daughter a better future.

“Every time things get hard and challenging I think of her, she’s my goal that pushes me every day,” she said.” 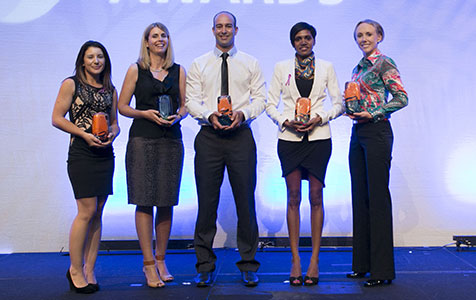 Link to news items 1 and 2 on the event on QRC’s website.

The first woman to be appointed as an asset president within BHP Billiton has won the prestigious Resources Award for Women presented in Brisbane today.

Laura Tyler, Asset President for BHP Billiton’s Cannington Mine in North-West Queensland the world’s largest silver and lead mine—introduced Cannington’s first diversity plan to improve the attraction and retention of women in the company’s workforce.

A mother of three, Laura has been ‘a working FIFO wife’ and has worked across four continents. She spends many hours mentoring other women, both inside and outside the company, to help them succeed in the sector.

Laura also recently became the first woman to be appointed as a Vice President of the Queensland Resources Council.

‘We must encourage our male colleagues to speak out on the subject. They remain the dominant hiring managers in our business and it is only through their engagement that we will see magnified change in the status quo,’ said Laura.

‘I have spoken at women’s events around the world to empower other women and show them that females can successfully fill senior roles in the industry. I believe diversity is not only important for individuals but also for our businesses.

‘Often I am the only women at the table in meetings. This needs to be corrected.’

‘Our contribution as an industry extends beyond employment, community development, royalties, taxes and shareholders and into people’s futures and dreams.

‘The ability to transform a natural resource into energy, infrastructure or food has far reaching implications for the communities beyond our front gate. It is the cornerstone for development and improving living standards across the world. The role our industry plays is very significant and comes with great responsibility.’

Queensland Resources Council Chief Executive Michael Roche says the awards, which lift the profile of women in the minerals and energy sector and provide a cohort of female industry ambassadors, are part of the QRC’s plan to increase the proportion of women in ‘non-traditional’ roles in the resources sector to 20 percent by 2020.

‘I congratulate Laura on her significant achievements, particularly for blazing the trail for other women to follow in her footsteps up the corporate ladder.
‘Stories such as Laura’s are reflected in our most recent gender diversity survey of our member which shows we are on track to reach our 20 percent by 2020 target..

‘The proportion of women working in our sector in non-traditional roles, which include senior management, engineering, trades, geology and operators, has increased from 11.9% in financial year 2011-12 to 13.5% in 2012-13.

‘Disappointingly though, the proportion of female trades people languishes at just 2% of the trades workforce. We have a lot more work to do in this area, and not just for women.

Trade training needs to come into the 21st century.

It’s an area where QRC is working hard with governments and the skills and training sector for better outcomes. I was privileged to chair the Queensland Skills and Training Taskforce in 2012 and its final report proposed a number of trade training reforms, which are now being implemented by the Queensland Government.

‘While our statistics continue to trend upwards, we know that we need to keep a sharp focus on measures to ensure that the resources sector is attractive to women, and provides a working environment that encourages them to stay.’

The awards were presented by the Assistant Minister for Natural Resources and Mines Lisa France, President of the QRC Rob Neale and Women in Mining and Resources Queensland Chair Jules Blunt.

Craig has a strong record in redressing the gender imbalance at Curragh by targeting women in recruitment for trade and technical roles, development and identification of women for senior roles, flexible working arrangements, and supporting Women in Mining and Resources Queensland events.

The figures speak for themselves. Since 2011, the proportion of women at Curragh has risen from 11% to 15.3%, and Craig says with it has come a positive shift in culture.

He says the company’s female leaders communicate in a manner more consistent with the creation of a better informed, empowered and engaged workforce.

However, Craig says there’s still a way to go.

‘I want to start having brave and open conversations about why some men find it difficult to relate professionally with women in our industry and what needs to be done about it.’ He said.

‘Mining has traditionally been a male dominated industry – but this is one tradition that we don’t want to continue with in the future – we actually cannot afford to.

‘If half of the population believe our industry isn’t attractive then we will not have the technical and leadership talent we need to remain globally competitive in the future. And if half the population aren’t involved in the conversations and the decisions we make on the job then we’re not going to get the innovative ideas needed to remain competitive and sustainable in the longer term.’

Queensland Resources Council Chief Executive Michael Roche says the awards, which lift the profile of women in the minerals and energy sector and provide a cohort of female industry ambassadors, are part of the QRC’s plan to increase the proportion of women in ‘non-traditional’ roles in the resources sector to 20% by 2020.

‘I congratulate Craig on his significant achievements in redressing the gender imbalance in our sector,’ he said.

‘While our statistics continue to trend upwards, we know that we need to keep a sharp focus on measures to ensure that the resources sector is attractive to women, and provides a working environment that encourages them to stay.’