Let’s Learn From Each Other, Kaberuka Tells African Youth 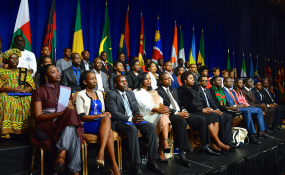 African youth have been told to exchange ideas with the elderly on the continent towards advancing the continent’s growth and development.

The President of the African Development Bank (AfDB), Donald Kaberuka, urged African youth and elders to learn from each other in the quest to build the continent.

He encouraged young people on the continent to dialogue with the elders.

Speaking at the event, “African Leadership: A generational dialogue”, at the ongoing 50th Annual Meetings of the AfDB in Abidjan, Côte d’Ivoire, Kaberuka, citing President Yoweri Museveni of Uganda, said being young is a question of biology; “however, biology gives nothing and it must be combined with something. Something like commitment.”

He urged African youth to be committed to the continent and to work hard.

Acha Leke, Director, McKinsey & Company, challenged African youth not to keep complaining about what they are not happy about on the continent, but to make efforts to change these things.

“Take one issue you are not happy about, stop complaining, and take it upon yourself to fix it,” he said.

He indicated that he is currently working with the AfDB to address the issue of visa restrictions on the continent.

He urged African youth to work to bring prosperity to the continent and drive its rebirth.

Ashish Thakkar, Founder of the Mara Group and Mara Foundation, called on African youth to change their mindset; he said he believes that a change of mindset can lead to growth and development on the continent.

He also announced the setting up of a Venture Capital Fund to support start-ups on the continent.

In her contribution, Zeinab Camara from the Women in Mining and Africa 2.0 Initiative called for the inclusion of more women in leadership. She said that when quotas for women are increased in sectors of the economy, they would make impacts on the continent’s growth and development.