Initiatives/ Things to change to encourage more girls into STEM

Back in the old days, men did woodshop while women did home ec. Men learned practical skills while women learned how to maintain a house. While these exact divisions don’t exist in classrooms today, still girls are rarely taught how to use a saw, weld metal, or wire a kitchen. Enter Rosie’s Girls, a three-week summer camp where girls entering grades 6-8 learn traditionally “masculine” skills like carpentry, welding, and fire-fighting. Cool!

Taking it’s name from Rosie the Riveter, the bicep-flexing symbol for women in the workforce during World War II, the camp aims to build the self-esteem of young girls and challenge the idea that certain domains are reserved for men. Girls wear construction hats, abseil down tall buildings, and get covered in paint. They also do silk screening, painting, and collage, and engage in physical activities like swimming and self-defense classes. The girls are taught to work as a team and support each other — a non-competitive approach that could be crucial for later life, helping to combat a Mean Girls mentality developing during high school, and even encouraging more female-to-female support in the workplace.

Crucially, the camp caters to girls at precisely the age when female self-esteem plummets. It is offered in eight different locations across five states: California, New York, Ohio, Rhode Island, and Vermont. 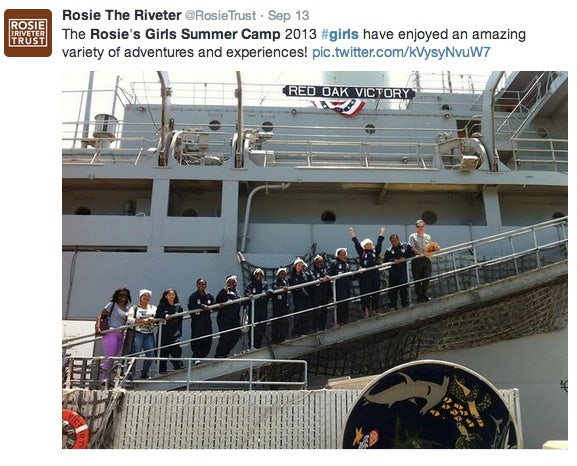 Rosie’s Girls is not alone in it’s approach. Another camp for girls between 9 and 12 years of age, Camp H, also hands girls hammers. Camp H is a construction camp that focuses on integrating math and science into design, to encourage ongoing female participation in these two areas where women are drastically underrepresented, both in college majors and in the workforce. The camp encourages girls to design, build, and be bold, and presents the girls with strong female role models in the form of architects, engineers, and designers.

What does it mean to be a Rosie’s girl? “I think it means you’re more independent, you’re more brave, and you don’t give up,” one camp attendee told Today.

Perception of science as a ‘male subject’ has to be reversed, The Telegraph, 14 July 2014

Role models and encouragement in the classroom; UK Young Scientists of the year, Ameeta and Aneeta Kumar, say their decision to pursue science was easy

Our decision to pursue science was a simple one. Throughout our education, we looked forward to science lessons the most. They offered us a way to understand the world around us.
Compared to other subjects, science lessons were unique in that they were filled with experiments and investigations. We would always learn something, even if the experiments didn’t go to plan.

When it came to deciding a future career path, we were immediately drawn to science. There always seem to be innovations and breakthroughs in science that promise to make a real difference in the world and which make science an exciting area to work in.

The subject incorporates a vast number of different fields and can lead to careers in many industries – something that could, we believe, be highlighted more effectively in schools.

However, our choice of science is not reflected in many girls our age. This is partly because science and engineering are considered to be ‘male’ subjects by some.

Despite this, there has been an increase in girls taking sciences to A-level but more could be done. The perception that science is hard and a ‘male subject’ has to be reversed. An increased awareness of women in science is needed, to offer girls role models and to show possible future careers.

For us, it was our teachers who were our role models, often telling us about their own careers in the industry. Their enthusiasm and expertise encouraged our interest and inspired us to expand our understanding of the application of science in real-life and the possibilities that innovative science offers.

Our experience with our teachers also shows that, for many young people, their first and closest role model in science is their own teacher. Therefore, teachers should ensure that they provide a balanced view on the possibilities available to both girls and boys and correct any stereotypes that may be held by students.

Another possible way to encourage girls into science and engineering is to boost their confidence in their ability.

Some girls may feel that they are not good at the science, despite their achievements clearly saying otherwise. Through constant encouragement and support, students’ views could be changed.

Having received support and guidance from our school, we never dismissed the idea of pursuing a scientific career. It was due to this that we applied for a Nuffield Research Placement, where we worked with scientists at the University of Oxford on a possible diagnostic tool for cancer, for which we subsequently received the title of UK’s Young Scientists of the Year.

Events that bring together scientific professionals with teachers and students could also help encourage girls into science; providing a network of support.

At the recent ‘It’s not for me’ talk by Twig, we were fortunate to be on a panel with Dr Anna Zecharia from Science Grrl and Professor Dalman from Imperial College London, who offered their views on how to encourage girls into science.

Our audience consisted of teachers and students from Hornsey School for Girls, whose enthusiasm and drive for science hints at the possibility of a more gender-balanced scientific workplace.

However, our personal advice to girls is to have belief in your abilities and have the courage to ask for help if you should need it. Finally, you should always be curious; so seek out any opportunities which will help you explore your interest in science further.