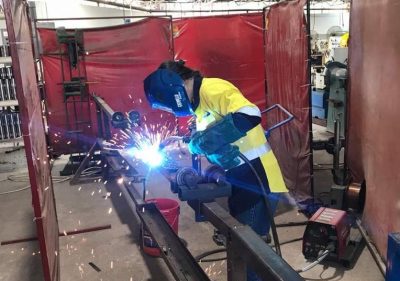 Traditionally, mining has always been considered a male-dominated field. The Global Mining Standards and Guidelines Group (2014) says 5 to 10 percent of people working in mining are women. At the director level, it is seven percent; the lowest of any major industry.

This is consistent on a country level in most mining regions. For example, in 2014, of the 10,949 members of the Ghana Chamber of Mines, there were only 659 women; thus about six percent of the total membership.

In sub-Saharan Africa where South Africa and Ghana are leaders in the mining industry, there have been many calls to improve these disappointing figures.

An article published by Review of African Political Economy (ROAPE) in 2016 says, South Africa, a country known for world class mining, women constitute 11 percent of the workforce in the mining industry even after more than 20 years of democracy.

In Ghana, for instance, women comprise 15 percent of the legal and 50 percent of the illegal artisanal mining workforce. The case is not as encouraging in the well-established large scale mining firms.

Be that as it may, as the world observed the International Women’s Day last Sunday, March 8, 2020 Geodrill Ghana, a leading exploration drilling company in the West African sub-region strengthens its resolve to invest more towards increasing women involvement in mining. This they hope will create a good case for many other companies in the mining industry to emulate.

What Geodrill Is Doing

Geodrill, which was established in 1998 with one rig in Ghana, now has 67 rigs across Africa.

The Head of Human Resources, Iddi Baah-Kurey revealed that per the firm’s model, they do not look for ready-made skills in the job market. Instead “Geodrill prides itself in hiring people with minimal or zero skills and then put the individual through mentorship and on the job training.”

The model helps them to make a conscious effort towards attracting women into the mining industry, an area which is traditionally a male dominated field.

Another strategy to increase employment of females is reserving specific roles in key departments for women. This has seen the recruitment of women into the Finance, Health and Safety, Stores and Warehouse, Human Resources and Maintenance Planning Units.

To further improve and sustain women participation, Geodrill also selects candidates freshly from the university through an aptitude test. The final candidates, particularly those selected for positions reserved for women only, are trained over time to become well equipped and globally competitive.

The training and gender sensitive support provided by Geodrill has proven successful with high retention rate. It has also increased the company’s female employee from just handful in 2015 when the staff strength was about 600 to 65 females out of 900 employees across the group. The Ghana operations leads with 44 females out of the 65.

Iddi Baah-Kurey indicated despite these interventions it is unfortunate that not many women are interested in the technical roles as they are in the other roles.

He recounted that a couple of years ago, Geodrill conducted an aptitude test for graduating students of the University of Mines and Technology (UMaT) in Tarkwa, with the hope of recruiting 15 gender-balanced graduates from the drilling class.

Try as they may, only two women made the final list. Despite the persuasion applied and benefits, the two women were unwilling to work on the drill rigs.

“Today, some of those who joined Geodrill from that year group have been trained to become deep directional drillers, engaged in world class drilling for our clients who are scattered in all our operational countries; Ghana, Burkina Faso, Cote d’Ivoire, Niger, Guinea, Togo and Mali. The company is now entering the African Copper belt.

Had the two women joined Geodrill they might be multipurpose or directional drillers today, Iddi Baah-Kurey recounted. He stressed that “as a world class drilling company, I am looking for to the day when we will have our first Ghanaian Female Driller in Geodrill”.

Nonetheless there have been a lot of success in the other departments which are also male dominated. The Health and Safety Co-ordinator for Ghana operations, Bernice Adzo Gbadam is an example.

Having worked at Geodrill since 2014 Adzo Gbadam is the first full time female employee to work at the main workshop covering all Ghana drill sites.

She admits that despite the rewarding nature of the role, “my male colleagues initially struggled accepting a female HSE officer.” She commended top management for their role in transforming the company’s culture which now makes her respected in her position by all.

She was excited about her experience which has seen her work on projects in Ghana and Cote d’Ivoire alongside her male counterparts. She described her experience saying “it is as good as gold.”

Using herself as an example, Adzo Gbadam who is in charge of Health and Safety stressed that “We would really like to assure women that they can do this work, because Geodrill provides all the necessary training on the job. Something I benefited from to become who I am today.”

Iddi Baah-Kurey, Head of Human Resources urged women to consider drilling as it is safe; saying, “We work in conjunction with Mine Site Health and Safety teams to ensure the safety of all, including our female workforce.”

He noted that since the Health and Safety Coordinator for the firm’s Ghana operations was a woman; It goes without saying that she is in the best position to device Health and Safety practices to prevent harm and injuries to staff (Both men and women) at the work place.

Baah-Kurey acknowledged that although women some years back showed little interest in mining firms in general, the situation has improved. “Geodrill Ghana, West Africa’s leading exploration drilling company only wishes we had more women candidates applying for technical roles just as they do for other roles.”