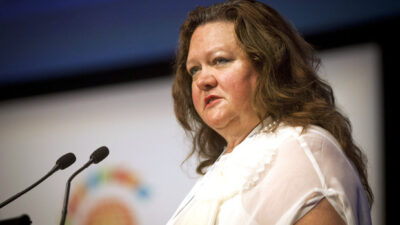 The e-mail Jacqui McGill received from one of her teams at a BHP Billiton Ltd. (BHP) coal mine in northern Australia contained great news: output delays were down 75 percent in a year.

That wasn’t the only reason she let out a whoop of excitement. “I did my little yeehaw, because every single person on the e-mail was a woman in a production role,” said McGill, asset president for two of the world’s biggest mining company’s operations in Queensland’s Bowen Basin.

“That’s the first time that’s happened in my career,” McGill, an industry veteran of more than 20 years, said of the July e-mail. “I have plenty of men in my business in senior roles, but I thought, that’s critical mass.”

In the global mining industry, women hold 8 percent of executive committee positions reporting directly to the chief executive officer, according to a study by the gender-consulting company 20-first. That compares to 18 percent in the $2.9 trillion pharmaceutical industry, the best performer in the survey.

The Diggers & Dealers Mining Forum is held annually in Kalgoorlie, a desert city known for its raucous nightlife. Some bars near the conference employ topless bartenders, known locally as skimpies.

“The entertainment provided by the town was not reflective of our values,” former Chief Executive Officer Terry Burgess, who left his position Oct. 17, said in an e-mailed response to questions.

It sends the wrong message for an industry seeking more women, according to Elizabeth Broderick, Australia’s sex discrimination commissioner. “When you participate in sexualized corporate entertainment, you are excluding women — and not only that, but potentially excluding men as well,” she said by phone from Sydney.

The forum doesn’t “conduct any function that could be seen as derogatory to women,” or “create anything at the event that could be seen as embarrassing or uncomfortable for any participant,” John Langford, a director of Palace Securities Pty, which runs and owns Diggers & Dealers, said in an e-mail. It has no control over events external to the forum, he said.

“We kind of walk the gender talk,” said Langford, pointing to the fact that the forum’s owner Kate Stokes and its only full-time employees, are women.

Ashok Parekh, owner of the city’s Palace Hotel, which hires skimpies in its bars, said delegates aren’t compelled to attend venues where partially clothed women are present. “You only go to those places if you want to go,” he said in an Aug. 6 interview at the forum. “Skimpies are basically a side issue.”

An aging workforce across the mining sector means producers worldwide face a lack of sufficient candidates for management positions and should seek a more diverse range of employees, including more women, according to Ernst & Young LLP. In Canada alone, about 20 percent of the mining workforce will be eligible to retire by 2018, the country’s Mining Industry Human Resources Council said in a report last year.

“We’ve been fishing from the same pool for a very long time, and it is exhausted,” Debbie Butler, a talent manager at Anglo American Plc (AAL) responsible for coal operations in Canada and Australia, told a Melbourne conference Sept. 22. “Our industry needs to focus on bringing new people into mining and this means looking beyond the traditional demographics.”

Glencore Plc (GLEN), the Swiss commodity producer and trader, in June appointed Patrice Merrin as its first female director, ending its status as the only company on the U.K.’s FTSE 100 Index (UKX) with an all-male board. At Brazil’s Vale SA (VALE), which hired its first female worker in 1928, 13 percent of employees are women, according to its 2013 sustainability report.

Seeking to promote mining to young women, Gina Rinehart, Asia’s wealthiest woman and chairman of the Australian mining company Hancock Prospecting Pty, this month invited students at the private girls’ schools where she studied in Perth to take up work placements at her Roy Hill iron ore mine.

Male workers at the Melbourne-based company earn an average of 11.7 percent more than women, down from 43 percent in 2007, she said. “Our target now will be to get that to 8 percent.” Across all Australian industries, the average wage gap is 18.2 percent, according to government data.

One of the biggest barriers to women moving into mining may be their perception of the industry, said Laura Tyler, asset president for BHP’s Cannington mine in Australia, the world’s largest silver and lead operation.

“My father was particularly horrified when I told him I was going into mining, and I grew up on the edge of the Lancashire coalfields,” in England, said Tyler, who hires the same number of male and female graduates at the mine and began a mentorship program to accelerate women into leadership.

Increasing numbers of women in mining is creating opportunities for new businesses.

After seeing a pregnant colleague at an Anglo American coal mine in Queensland wearing a large, ill-fitting uniform to accommodate her bump, Kym Clark last year started a https://shes-empowered.com/ selling luminous, high-visibility work clothing for women in mining and construction, including maternity wear.

“I noticed how comfortable all the men were in their high-viz, and how uncomfortable she looked,” said Clark, a former management accountant at Anglo, who began selling uniforms in November to Glencore, BHP and other customers.

Still, mining is behind every other industry, including oil and gas, in terms of gender diversity, according to a February report by Women in Mining U.K. and PricewaterhouseCoopers LLP.

Women occupy an average of 8 percent of board positions and 12 percent of management posts at mining companies with a market value of at least $500 million, according to data compiled by Bloomberg. This compares equivalent-sized food, beverage and tobacco companies where 13 percent of directors are female.

“There’s a significant correlation between bottom line profit and how well a company does and having more women and diversity in your senior roles,” said Ottawa-based Clare Beckton, Executive Director at Carleton University’s Center for Women in Politics and Public Leadership.

And with companies looking for ways to cut spending, mining crews with more female staff at BHP have lower maintenance costs, according to the company’s Tyler, its first female asset president. Diversity also breeds better team work, she said.

“The behavior is not quite as macho,” Tyler said. “It feels more like a team that you want to be a part of, than some teams that are all middle aged, white guys.”

To contact the reporter on this story: David Stringer in Melbourne at dstringer3@bloomberg.net

To contact the editors responsible for this story: Jason Rogers at jrogers73@bloomberg.net, Keith Gosman, Will Wade