Home » News » A War Within Wars: The Impact on Women of the Violent Struggle For Natural Resources in the Congo

A War Within Wars: The Impact on Women of the Violent Struggle For Natural Resources in the Congo 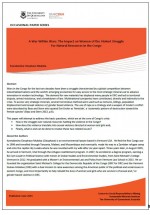 Wars in the Congo for the last two decades have been a struggle characterized by a global competition between industrialized nations and the world’s emerging economies for easy access to the most strategic mineral use to advance innovation in modern technology. The demand for raw materials has displaced many people in DRC and led to territorial dispute, armed resistance, and a breakdown of law. Multinational companies have contributed, directly and indirectly to the crisis. To access very strategic minerals, several horrendous method were used such as tortures, killings, population displacement and sexual violence or/ gender based violence. The use of rape as a strategy and a weapon of modern conflict were described by Baaz and Stern who quoted Eve Ensler as ‘femicide’, a ‘ systematic pattern of destruction toward the female species’ (Baaz and Stern 2013, p.6).

This paper will attempt to address the basic questions, which are at the core of Congo’s crisis.:

• How is the struggle over natural resources fueling the violence in the Congo?
• How does this violence translate into sexual violence directed at women and girls and;
• Finally, what is and can be done to resolve these two related issues?