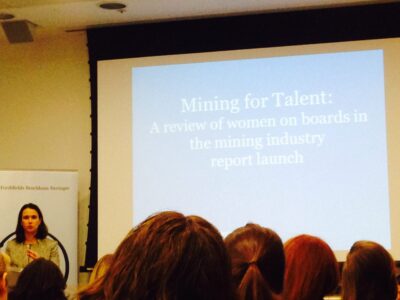 Dina Medland wrote a great blog post about today’s launch event of WIM UK’s latest and final women on boards report. You can read it below. Sorry about the poor quality fo the photograph, not having my camera with me the mobile had to do

Women In Mining: It’s Just Not A Supply Problem

STOP the presses? There has been a 3.1% increase in appointments of women to boardrooms of the top 100 global listed companies since 2012. At this rate it will take until 2039 for these companies to reach a 30% critical mass of women on boards. Clearly there are a lot of senior men in the global mining industry who have just been hoping the issue will go away.

A report just out by Women in Mining UK and PwC : ‘Mining For Talent 2015 – A review of women on boards in the mining industry 2012-2014′  is the first published analysis of participation by women at board level in global mining. It examines the correlation between company performance and the presence of women on management teams and boards – and offers evidence of better dividend yield and other quantifiable performance measures.

Of the 500 mining companies surveyed for the report, 7.9% of boards are female, with the picture better among the larger companies. In the top 100, the figure is 11.1%. The report also contains the results of a survey of both sexes at board and senior management, highlighting what they perceive to be the barriers for entry.

Among the most notable answers:  A male dominated culture with a ‘Boys’ Club mentality’ / A small talent pool in the pipeline /Lack of sponsorship and role models / Working flexibly in order to raise a family is seen as a hindrance to promotion /Lack of senior management commitment to diversity. It does make you wonder whether anything has changed in the last three years in terms of attitude to gender equality.

But the London Stock Exchange (LSE), which accounts for the largest proportion of mining companies in the top 100 listed mining companies by market capitalisation, shows the greatest improvement over the last three years.

In 2012, those companies in the top 100 listed on the LSE ranked lowest in respect of female representation on boards. Today, it is second highest. This is credited largely to the UK government’s commitment to gender diversity and the work done around the review led by Lord Davies of Abersoch of women on boards.

“Women are well represented across a broad range of executive roles which could lead to positions on the board including in the core areas of HR and finance” says WIM (UK). There is still a dearth of women in operational roles, seen as key for promotion to the board, but there is no shortage of talent.

The UK’s experience suggests that the shortage of women in senior – and powerful – roles is not, nor has it ever been predominantly a problem of supply. If women need operational experience to progress, the WIM UK report suggests schemes be introduced to ensure they get it. It identifies six steps it hopes mining companies will consider adopting to improve diversity.

Today’s report offers further evidence to suggest that change only happens when the leadership at the top is willing to take responsibility for it – and that requires being secure enough to ruffle feathers and open up its power base.