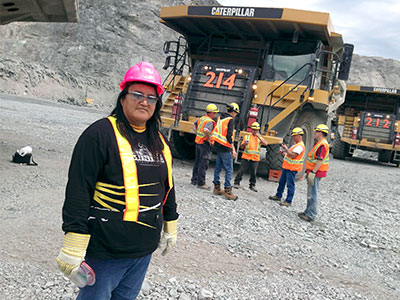 Myra Wabie (front) got a look at a big rig while going on a ride along during a site visit to AuRico’s Young-Davidson gold mine.
Her official title is job coach, but in her role with the Temiskaming Native Women’s Support Group, Kelly Lamontagne can, on any given day, also serve as a social worker, mover, relationship guru, personal shopper, addictions counsellor, cheerleader and headhunter.It’s all done in the name of helping Aboriginal women in Temiskaming and Timmins train for work in the mining industry through the two-year program Aboriginal Women in Mining.

“The group’s purpose is to help as many women as we can,” Lamontagne said. “If you’re making strong women who can make strong decisions and have a good career and have good self-esteem, you’re then making stronger children, stronger families, better men.”

Any woman with First Nations, Métis or Inuit heritage within the catchment area is eligible to apply to the program, although it’s targeted primarily to women who have faced serious life challenges such as trauma, poverty or addictions.

Employers who take on a program participant can receive up to 50 per cent of the cost of their hourly wage, up to $10.50 per hour. The hope is that the subsidy will give the employer an incentive to hire an Aboriginal woman over another candidate, Lamontagne said.

“It’s really for the purpose of training them into whatever that job is, because a lot of the employers wouldn’t look at somebody with no education and no experience,” she said. “That’s what the program is for: to get them that experience and that training.”

Lamontagne said that, 90 per cent of the time, if presented with two candidates who have identical resumes, an employer will choose the male applicant over the female. That figure rises when the candidate is female and Aboriginal.

Culture can also play a role. Aboriginal people are often shy or introverted and fail to make eye contact — a sign of respect in Aboriginal cultures — and it can often be misconstrued that they aren’t engaged or interested or understanding what’s being taught. In fact, the women in the program are eager to train and to work, and soak up the knowledge being transferred, Lamontagne said.

Since the employer has to spend the time and money to train a person anyway, by choosing a program participant, the company is giving a woman a hand up, while also getting a wage subsidy to help defray costs, she reasons. In light of the coming skilled workers shortage, it also allows companies to tap into a ready and willing segment of the workforce that is often overlooked.

“If you never give them a chance, how do you know they can’t do it?” Lamontagne said.

Industry participants to date include Kirkland Lake Gold, Timmins Gold Corp., Dumas Mining, AuRico Gold, Queenston Mining and Armistice Resources, but Lamontagne is always on the lookout for more, including contractors like Ledcor, which hired on two women after getting permission from AuRico to bring participants onto company property.

Roughly three out of five participants are successful on their first try. Often they just aren’t ready, or haven’t addressed life issues that prevent them from holding down a steady job. But women who don’t succeed the first time are encouraged to come back and re-enroll when they are ready.

Halfway through the project, more than 80 women are enrolled in various stages of the program, including 46 who have graduated.

Program funding is only in place for another year, but Lamontagne would like to see it extended so the program can be in place full-time. There are plans to help young Aboriginal men who have dropped out of high school. After seeing their female counterparts get work through the program, they’ve requested something similar so they can work, too.

“I think, a lot of times, the employers feel like it could be a hassle,” Lamontagne said. “They don’t realize how easy it could be.”