The Power of Parity: How Advancing Women’s Equality can add $12 Trillion to Global Growth

Home » Reports » The Power of Parity: How Advancing Women’s Equality can add $12 Trillion to Global Growth 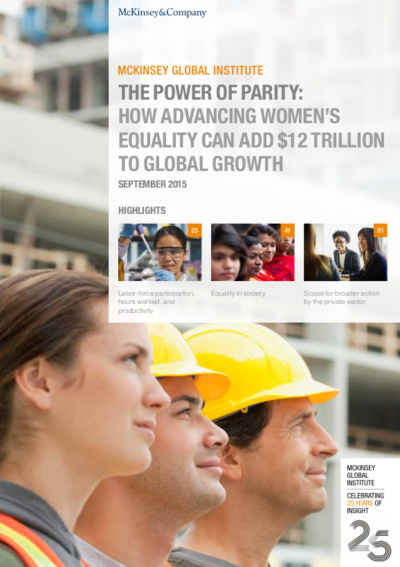 In this report, MGI undertakes what we believe may be the most comprehensive attempt to date to estimate the size of the economic potential from achieving gender
parity and to map gender inequality. Using 15 indicators of gender equality in 95 countries, we have identified ten “impact zones”—concentrations of gender inequality that account for more than three-quarters of the women in the world affected by the gender gap—that we hope will help prioritize action. In addition, MGI has developed a Gender Parity Score, or GPS, that gives a view of what will help to close the gender gap. Our hope is that this analysis can point the way toward effective interventions and lead to new regional and global coalitions of policy makers and private-sector leaders. This report builds on McKinsey & Company’s long-held interest in women’s issues in
economics and business, notably our Women Matter research and participation in the UN Women Private Sector Leadership Advisory Council.
Download report
Visit Website
View Source