Home » News » Is the industry under threat to lose its senior female talent?

Is the industry under threat to lose its senior female talent? 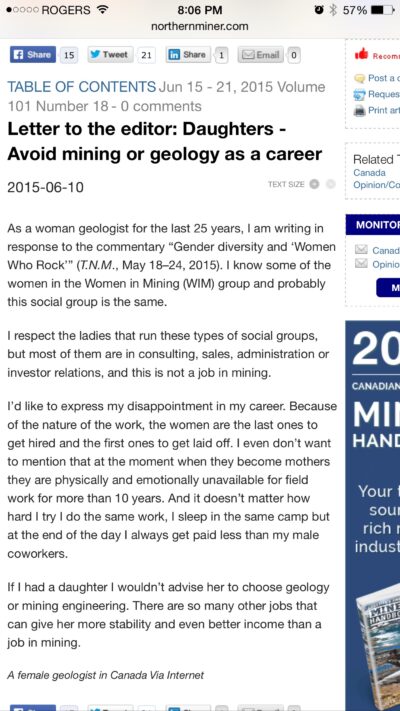 Lately a few of the women I spoke to/met said that they were really tired of fighting to be valued for their work and were seriously considering leaving the industry: I’ve heard of sexual harassment, lack of promotion, redundancy and unfriendly work environments.
One of the women decided to vocalise how she felt and wrote a letter to the Northern Miner which we publish below. Most are to shy to speak out and are scared of consequences like dismissal (it does seem to happen).
They are resilient and persistent, enduring bad work environments for years and even decades because they like mining!
Sounds like we aren’t advancing fast enough in making the work environment fair and pleasant and that the mining industry is about to lose its most senior female talent at rapid speed.
These aren’t young graduates, these are the senior women that add value and essential work to your organisation. Strategically, driving experienced talent away doesn’t make sense. Mining seems to forget that – even if they love their industry  – women can take their talent to another company or sector where it will be appreciated. Even younger women at all ages of their career leave.
It isn’t just that women are entitled to the same opportunities, equal pay, and a fair work environment (which they do). It is that to stay competitive and innovate, companies and teams need to be exposed to different points of views and only diversity brings that. Opting for the homogenous male-dominated status quo seems short-sighted when several studies indicate that more gender-balanced teams from the top down make for better financial performance.
What are your stories and do you agree with the female geologist who penned the letter below? Would you advise your daughters against mining?

Letter to the editor: Daughters – Avoid mining or geology as a career
As a woman geologist for the last 25 years, I am writing in response to the commentary “Gender diversity and ‘Women Who Rock’” (T.N.M., May 18–24, 2015).