Home » News » In Norway's mines, women are a rare resource

In Norway's mines, women are a rare resource 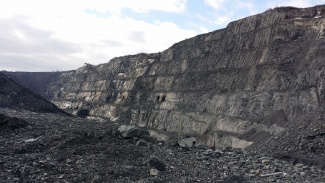 Ida Kronsell marches without hesitation across a field of rubble in the biggest pit of the Sydvaranger iron-ore mine, outside Kirkenes.

She’s been working here as a pit technician for over a year now, and this is old hat. We hurry after her, stumbling over the rocks. See the video

When we catch up to her, she tells us she remembers her first days at the mine, chasing after her boss across the uneven ground. She had a hard time keeping up. “But now I’m the one who walks fast,” she says, laughing.

Kronsell is a minority at the Sydvaranger mine. Only 20 per cent of Norway’s mining employees are women, according to government statistics. And that number has barely changed since 2008, the first year data were available.

Though the World Economic Forum ranked Norway third in the world for gender equality last year (after Iceland and Finland), the nation’s mining industry has been slow to move toward balance.

“The mining industry in Norway has an image problem,” said Elisabet Ljunggren, research manager at the Nordland Research Institute. She’s currently working on a project that analyses gender equality issues in Norway, Sweden, and Finland. Ljunggren said people see the mining industry as old-fashioned and environmentally damaging. That perception does little to attract young women. “I think the first barrier is that you’ve got to make the mining industry something young women would consider to educate themselves for,” she said. “I don’t think it’s something young women… regard as an alternative.”

At Sydvaranger, Kronsell told us she never thought about mining when she studied to become a geologist. She ended up in Kirkenes because that’s where she could find work. “I graduated and I started applying for jobs, and I got this job,” she said. “I don’t actually think that I saw myself working in a mine before I actually came here.”

But Ljunggren believes mining companies have a vested interest in making the industry more appealing to women. “These women bring in a better safety culture,” she said. “They take better care of the machinery. They are more fine-tuned when they work. They lower the number of accidents.”

Still, there are other obstacles that often stand between women and careers in mining. Mines are frequently in remote locations, and many workers fly in and out of camps to work their shifts. Ljunggren said the workers who commute are predominantly male.

Amanda Hansson, a geologist at Sydvaranger, knows all about the challenges of the mining lifestyle. She doesn’t commute; like Kronsell, she moved to Kirkenes to work at the mine. But she worries that continuing a career in mining could mean a lot of instability.

“As a geologist working within mining, I probably have to work at remote locations… which would be a problem if I’m going to have a family in the future,” she said. Hansson plans to leave Sydvaranger this summer to move with her boyfriend to Australia. She’s thinking about studying something new.

Norway may fare a little better than some other countries when it comes to employing women in mining. In Canada, for instance, women make up only 14 per cent of the mining workforce. In the United States, roughly 13 per cent of mining, quarrying, and oil and gas employees are female.

But Ljunggren said Norway needs better policy to ensure mining companies take steps to employ more women. For instance, she said, more stringent requirements must be applied to the many subcontractors in the industry, who can be difficult to monitor.

As for Kronsell, she hasn’t had any second thoughts about her career choice since she came to Kirkenes. “I don’t regret it at all,” she said. “I don’t even think that I spend too much time thinking about that it’s a male-dominated line of work.”