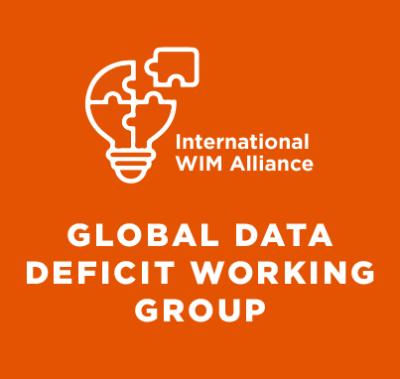 16 August 2022. By Topi Vaarala, Vice-Chair of the Board, Women in Mining Finland, and Co-coordinator of the Global Data Deficit on Women in Mining working group, International WIM Alliance

The inclusion of female talent in the mining industry has become a focal point for companies, civil society organisations and policy makers alike. Throughout the world there are different indicators which rate female participation in the industry with various rates of depth and overall information. The International WIM (women in mining) Alliance’s working group on Global Data Deficit on Women in Mining sought out to evaluate the main frameworks by which the industry benchmarks gender performance. The working group is co-hosted by WIM Finland and WIM Ecuador, with participants from WIM organisations all over the world.

Data, indicators and general information about performance and workforce inclusion are key to the gender equality agenda. That which is not measured is not visible, and can therefore not be modified. If we want to achieve equality, equity, diversity and inclusion in the mining industry, the sector needs a baseline and granular gender disaggregated data. In their mission statement, WIM organisations seek to actively contribute towards gender equality in their locations, and it is therefore key for them to know the baseline in their own countries, in order to shape strategy and identify their most critical challenges.

Between 2021 and 2022, the working group analysed four international reporting frameworks, especially focusing on the reporting guidelines concerning numerical gender-related data disclosure. These frameworks benchmark and analyse the extractive sector’s companies and overall countries regarding sustainable development, responsibility and gender. This study focused on answering the following questions: (i) Could any or all the frameworks be used to improve the global data deficit on women in mining? and (ii) Could these frameworks be used to gather numerical gender-disaggregated data specific to the extractive industry?

The first framework to be evaluated was the EITI Guidance Note 30. EITI, or Extractive Industries Transparency Initiative, is described on their website to “promote[s] the open and accountable management of oil, gas and mineral resources. ≥57 EITI-member countries follow EITI guidelines to report on their country’s extractive sector performance and indicators. As of June 2022, 41 countries are classified in the class “very high”, “high/satisfactory” or “moderate/meaningful” from the perspective of EITI standard implementation.

GN30 adds a gender approach to the standard, requiring EITI-compliant countries to disclose, among other things, the total workforce gender distribution of the extractive sector. It also requires that a multi-stakeholder group overseeing EITI implementation be established. The gender balance of the group must be considered and barriers for female representation need to be actively lowered. (EITI 2019)

The topic of gender transverses the entire framework, with focus on company policies and systems regarding gender-based violence, health and safety needs of women workers and enabling female participation in community engagement. Additionally, gender balance and assessment regarding the impact of companies’ activity on women are included in the framework. In the 2022 report, 40 companies from 22 countries were covered, and for the first time mine sites were included in the analysis rather than focusing only on corporate headquarters. (RMF 2022)

The Global Reporting Initiative (GRI) was created as an international guideline for social responsibility reporting. It is a structure used by private companies and governments for sustainability reporting, and while it does require basic key information, it is not binding.

GRI standard “GRI 405: Diversity and Equal Opportunity” provides guidance on how to report gender-specific data. Organisations can choose to apply the standard for reporting but it is not part of the universal GRI report standard. Usually, this standard is applied when company actions or ways of doing business have been found to have potential impacts on discrimination and equal opportunities. (GRI 2016)

An index is published annually based on the reports received, while the top 100 rated companies are included. GEI can be used by investors and regulators to evaluate how a company is performing from a gender perspective. An organisation is not required to complete the entire framework, but the more questions are answered the more value the organization earns on the index. (GEI 2022)

The four reporting frameworks were compared from the perspective of disaggregated gender data disclosure, focusing on numerical, easy-to-compare data, for example the proportion and percentage of women and men in senior management (Figure 1). In addition, the disclosure requirements on pay gap, female turnover and female participation by work function have been compared. Some reporting frameworks are clearly more complete than others, and a significant overlap is also present. 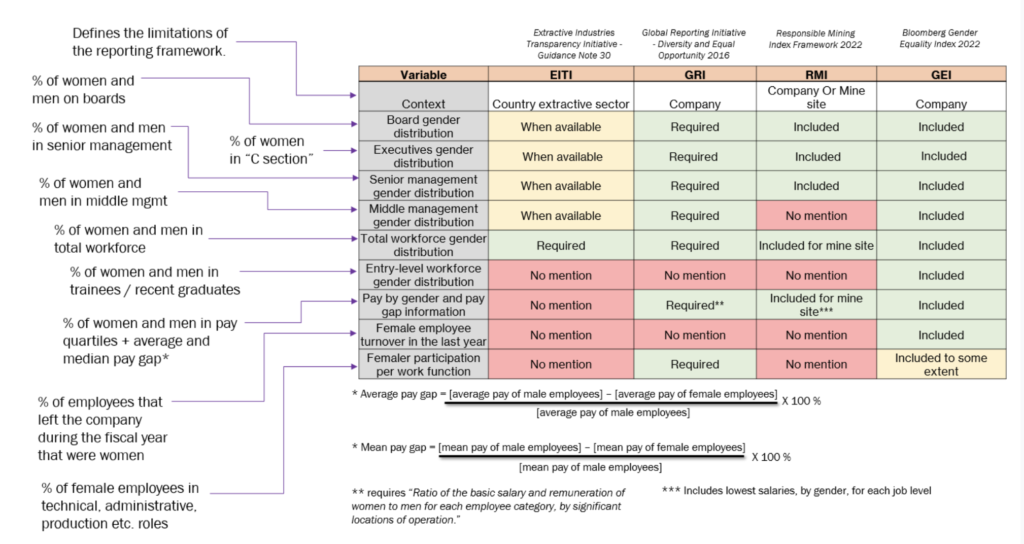 GEI is the only framework including entry-level workforce gender statistics. When it comes to pay gap information, only EITI does not mention it. GEI encourages companies to look at both at the overall pay gap and the proportion of women in different pay quartiles. GRI disaggregates pay gap information even further, with full disclosure status requiring the pay ratios of women to men at different levels of the organisation and across different locations and operations. For RMI, the lowest salaries for each job level are reported, and these numbers are given for each of the company’s mine sites (when available).

Out of the four examined frameworks, female employee turnover is mentioned only in GEI. Female participation per work function is only required in the GRI405, while GEI only considers female participation in information technology (IT) and engineering workforce (questions 11 and 12 of GEI 2022).

Out of the four frameworks studied, GEI is the most comprehensive reporting framework when it comes to disclosing numerical gender disaggregated data. More than 30 of the 80+ questions (sub-questions included) in the GEI framework ask for a gender related average, number or percentage. GRI guides organisations to report gender-disaggregated data, but not quite to the extent that GEI does. Neither of these frameworks are tailored to report data concerning mining companies or the extractive industry specifically.

RMI guides mining companies to disclose data about gender-related policies and company systems concerning, for example, gender-based violence and PPE suitable for women. In the RMI, numerical gender-disaggregated data disclosure does not get similar attention than is the case for GEI, having for example no mention about middle management, entry-level workforce gender distribution or female turnover. When compared to GEI, RMI is advantageous in the sense that it guides the company to report some gender-related statistics also disaggregated by mine site; GEI does not encourage disaggregation based on company sites (no mention).

The EITI, similarly to RMI, focuses less on disaggregated numerical gender data disclosure, while putting more emphasis on the multi-stakeholder group gender composition formed to oversee EITI implementation. Because EITI looks at the context of the entire extractive industry of a country, it should be possible to compare the gender distributions of extractive industries of EITI-compliant countries in the coming years.

It is positive to see more gender-specific information included in reporting standards and guidelines. Companies with more diversity, equality and equity are performing better, and gender-disaggregated data helps highlight the above-par mining companies from a gender perspective. Companies which are not ready to disclose their current gender-specific data are not necessarily reporting, therefore creating a blind spot about the existing gap between high-achieving companies and those which have a way to go in so far as the inclusion of female talent among the different roles in their organisations. The current frameworks do not provide a crosswise baseline with which to benchmark all companies within one region or country.

On the other hand, companies may find the increased reporting requirements crippling. Many mining companies are facing more and more reporting requirements such as industry certifications, reporting standards, guidelines from industry associations, international guidelines and norms, investors, stock exchange and financiers’ requirements, and the list goes on. This may restrict the intentions from mining companies to report, and therefore promote increased indicators in reference to the inclusion of female talent in their companies in the medium and long term.

Gender specific consultancies, WIM organisations and IWiM as the overarching entity, are generating specific data with which to learn, reference and promote improved performance in gender inclusive practices. However, this does not provide a unified standard by which the industry can leverage information and make informed decisions to increase indicators about female inclusion in the industry.

ABOUT THE INTERNATIONAL WIM ALLIANCE

The International WIM (Women in Mining) Alliance brings together global WIM organisations to leverage collective strength in pursuit of gender equality in the mining industry. It aims to become a global, multilateral platform which facilitates collaboration and promotes the emergence of a unified WIM voice. Since 2021, there are four working groups focused on i) more women in STEM; ii) inclusive workplace design, iii) global data deficit and, iv) role models and mentors.