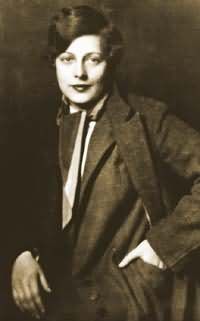 Hahn was born in St. Louis and lived there until her family moved to Chicago during her high school years.

Emily Hahn never intended to pursue a degree in mining engineering. As a 17-year-old freshman in the College of Letters and Science in 1922, she simply wanted to take a chemistry course offered only to engineering students. When the dean of her college refused to grant a waiver, she switched to an engineering major out of spite, fully intending to return to her liberal arts curriculum the following semester.

However, as a new engineering student Hahn was met with great resistance from the all-male faculty and student body, which even appealed to the state legislature to have her barred from enrolling. (The legislature refused.) This was opposition from which Hahn couldn’t back down. “Like many young people in my day,” she wrote in her 1970 autobiography, “I was bristling with principles, eager to find abuses in the world and burning to do away with them.” Not only was Hahn an outsider in the classroom because of her gender, she was also barred from field trips, visits to mining operations, and professional societies. Hahn, who describes in detail and with great sensitivity, the feelings she had upon being ostracized, outgrouped, and subjected to stereotyping and gender slurs, prevailed.

Four years later, in the spring of 1926, she became one of the first women to receive a bachelor of science degree in engineering from the University of Wisconsin-Madison and the first mining engineering degree awarded to a female student.

Following graduation, until the spring of 1927, Hahn worked briefly for a St. Louis lead and zinc mining company where, because of her sex, she was only allowed to do filing and other office work. With a thirst to see the world, she soon moved to New Mexico to work as a tour guide. Returning to the East during the summer, she attended Columbia University for graduate work, taught geology during the 1927/28 academic year, and then headed for Europe on her first overseas tour (where she did research for an American author). After living in Florence and London, she returned home briefly in 1929 before going to the Congo and two years’ residence there. In 1932 she began further travels, finally settling in Shanghai in 1935 where she taught English for three years.

All during this decade of travel and adventure Hahn wrote almost continually – articles, stories, letters – and many of her pieces were printed in The New Yorker, as well as five full-length books being published. Fortunately, as a supplement to her writings, the collection also contains Hahn’s letters home to her mother and family while she lived and traveled in Europe, Africa, and China. This early correspondence is particularly descriptive of people, places, and activities, and is most interesting for the early years of Asian conflict that would later be seen as a prelude of World War II. The Sino-Japanese conflict eventually caused Hahn to leave Shanghai for Hong Kong, where she was later forced to remain after the Japanese took over that area in 1941. She was finally repatriated in 1943 and proceeded to produce two books concerning those years: China to Me and Hong Kong Holiday .

Hahn continued to “accidentally” be drawn to situations and places where she would automatically be outgrouped because of her gender, race, or nationality. Traveling alone to China and other areas of Asia and Africa, Hahn is a careful observer of the way she reacts to people and situations, and how people react to her.

As a person who is immediately outgrouped because her difference from the dominant group is immediately apparent, Hahn learns how to cope and even exploit the fact that she is overly visible, and her very presence creates spectacle. Her narrative shows the reader how it is possible to transform potential or even ongoing humiliation into triumph.

In 1945 Hahn married British Major Charles Ralph Boxer, 1904-2000, whom she had met in Hong Kong prior to his internment as a POW, and following the war they moved to his family home in England. She continued to write short fiction, articles for magazine publication, particularly The New Yorker, and a remarkable number of books. During the 1950’s she ventured into the juvenile field with some fiction, juvenile biographies, and descriptions of some of the countries in which she had traveled or lived. Other publications include biographies of Aphra Behn, James Brooke, Fanny Burney, Chiang Kai-shek, D.H. Lawrence, and Mabel Dodge Luhan; a description of the diamond business; four books on zoos and animals; histories of China, Ireland, women; and several autobiographical accounts.

In her last years she devoted much of her time to writing about wildlife preservation and monkeys. For her scholarly work on primate intelligence and animal communication, she was elected to the American Academy of Arts and Letters.

An article published in the March 10, 1997 edition of The New Yorker describes Hahn as “a woman deeply, almost domestically, at home in the world . . . She knew the famous and the powerful but was more at home in the company of bartenders and cabdrivers, unpublished writers, widows and nurses’ aides, as well as her nieces and nephews, her daughters, and her four beloved sisters.”