The Impact of Gender Composition on Team Performance and Decision Making: Evidence from the Field

Home » Reports » The Impact of Gender Composition on Team Performance and Decision Making: Evidence from the Field 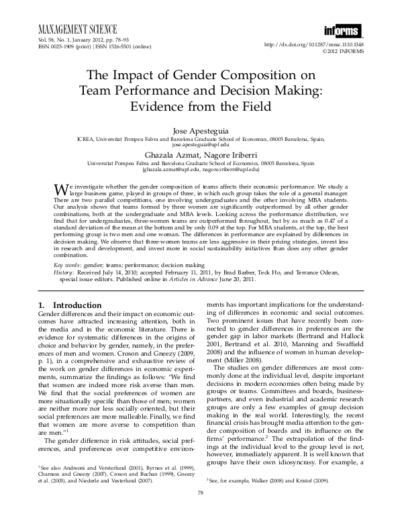 We investigate whether the gender composition of teams affects their economic performance. We study a large business game, played in groups of three, in which each group takes the role of a general manager. There are two parallel competitions, one involving undergraduates and the other involving MBA students.

Our analysis shows that teams formed by three women are significantly outperformed by all other gender combinations, both at the undergraduate and MBA levels. Looking across the performance distribution, we find that for undergraduates, three-women teams are outperformed throughout, but by as much as 0.47 of a standard deviation of the mean at the bottom and by only 0.09 at the top. For MBA students, at the top, the best performing group is two men and one woman. The differences in performance are explained by differences in decision making. We observe that three-women teams are less aggressive in their pricing strategies, invest less in research and development, and invest more in social sustainability initiatives than does any other gender combination.
Visit Website
View Source