THE FEMALE FTSE REPORT 2007: A Year of Encouraging Progress 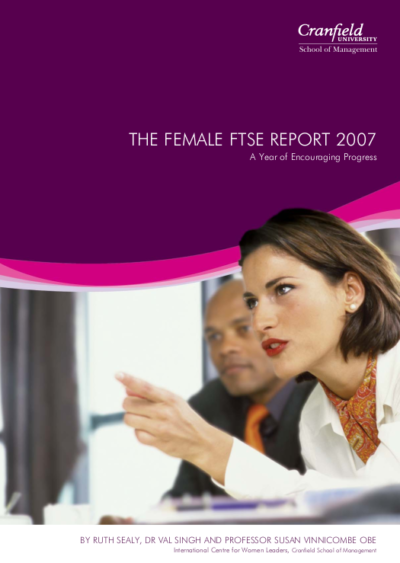 In 2007, our ninth report, we see a continuing change in the balance of directorships in the FTSE 100 corporate boards. Both the number of executive directorships and total number of directorships are at their lowest levels for nine years. Meantime, the number of non-executive directorships is at its highest for nine years. Against this context we have seen several high water marks in women’s advancement onto these boards. There is an emerging polarisation between the cluster of 24 companies who are entirely male led and the newly growing cluster of 35 companies with multiple women directors. There are now 100 women occupying 123 directorships on FTSE 100 boards making up 11% of total directorships. Women constitute 20% of all new director appointments this year – the highest since Cranfield started monitoring the Female FTSE in 1999. Thirty women were appointed this year, of whom five had not previously held FTSE 100 directorships. More note worthy, there are now 122 women sitting on the FTSE 100 executive committees, an increase of 40% on 2006 and these women occupy a great variety of roles.
Download report
Visit Website
View Source