Home » News » Women make up half of apprentices in mining program

Women make up half of apprentices in mining program 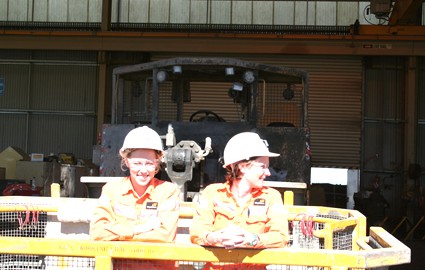 Young women will make up half the mining apprentices taking part in a work readiness program that kicks off in Queensland today.

Thirty-one apprentices will be involved in the four-week BHP Billiton Mitsubishi Alliance (BMA) work readiness program, which is run by the Queensland Minerals and Energy Academy (QMEA), learning trade skills in an environment that replicates practices on mine sites.

BHP has been at the forefront of establishing a gender diverse mining industry. The company announced last year that it planned to make half of its workforce women by 2025 as a gender diverse company would improve performance.

Moranbah State High School’s Coalfields Training Excellence Centre will host the program before the apprentices – 16 who are female – then embark on their fulltime roles at six (BMA) sites across central Queensland.

QMEA director Katrina-Lee Jones said the initiative, in its second year, broke new ground in the education and training sector, ensuring a safe, seamless transition from school to site.

“The BMA work readiness program was a logical extension to our schools program with a number of BMA apprentices participating in QMEA experiences over the past few years,” Jones said.

“It was also great to see that half of the apprentices are women, who gained their places based on merit.

“It also comes at a time when Queensland Resources Council (QRC) members are becoming concerned about the availability and cost of skilled labour as the sector picks up.”

The QMEA finds it significant that all apprentices in the program come from regional towns.