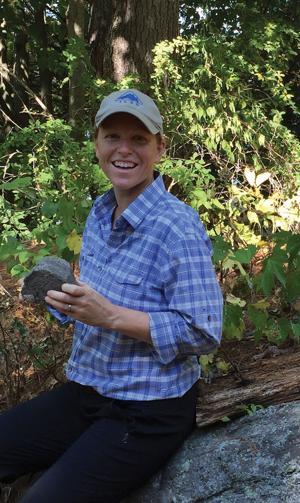 The world has changed since Janeanne MacGillivray challenged Subsection 10 of the Yukon Mining Safety Ordinance that stated “no female person shall be employed in underground work in any mine.”

That was in 1975 when MacGillivray headed north to seek equal opportunity in the resource economy and what she later described as a “big fat paycheque.”

There have been other female trailblazers in the mining industry. Women in mining today are picking up where these pioneers left off.

Lesley Weston, a professional geologist working locally, is a past-chairwoman of the local chapter of Women in Mining, an international organization that provides a professional network to support women working in all aspects of the mining industry.

The organization, which has 50 members locally and a mailing list of over 200, develops grassroots initiatives for professional and personal development of women in the industry.

Although women in today’s industry don’t face the same kind of barriers as in the past, it is still a male-dominated industry and the organization is working to reach out to girls and young women about the many possibilities and rewards that are available to them in the vibrant mineral development economy of Northwestern Ontario.

Female mentors from WIM reach out to high school girls through programs like Ontario Skills, hoping to light that first spark of interest that might lead to a future geologist, prospector, mine engineer or miner.

Weston recalls when that first spark moment happened for her. When she opened up the first-year university geology textbook and saw a map of what the world would look like with no oceans, exposing all the rock formations underneath, it left an impression on her that she never forgot.

“I was blown away by that,” she says, her passion evident. That passion led to a PhD in geology and a successful career including analytical work, teaching and mineral exploration activities. And Weston is now encouraging other young women to consider the possibilities in this diverse field.

For local geologist Caitlin Jeffs, one of the owners of Fladgate Exploration Consulting, the path to the mining industry evolved from an aptitude for mathematics and a sense of adventure that lead her to summer jobs in the Arctic. While working in Dawson City, she saw geologists and prospectors coming into town to sell their bags of placer gold dust and she was intrigued.

“I was fascinated by the idea of adventure and that you were an explorer of sorts” she says.

When she first started working in the field, Jeffs didn’t experience any significant barriers because of her gender. During the early 2000s, when she was back working in the Arctic during a period of discovery of diamond deposits in, she noticed that there were in fact, a lot of women working there in mineral exploration. She feels that the “glass ceiling “ that existed in the past for women in mining has evolved as recent generations have become more progressive and women have demonstrated their competency. She says that she has always approached her work with confidence and an attitude that gender is not an issue.

“You just need to sit down and do your job”, she says, “I have never been treated differently.”

And because mining is an international business, Jeffs points out that she has met people from all over the world. And there is always something new to discover.

Quite simply, “exploration is exciting,” she says.

That excitement translates over into the production side of mining as well, as Meliisa Martikkala, a metallurgist with Goldcorp’s Musselwhite Mine can attest. A Sudbury native, she says that mining was always in her life. After obtaining a degree in chemical engineering technology, she took some courses in mineral processing and has worked in Musselwhite’s metallurgy department since 2009. As part of her role, she is involved in the gold refining process which is an especially exciting part of the job.

“I get to pour the gold bars,” she says proudly.

Martikkala is the first woman at Musselwhite to refine the gold.

She recalls that some were sceptical about her ability to do the physical part of the job, as an average gold bar weighs between 50 and 75 pounds. She happily proved them wrong and feels privileged to see “the final result of everybody’s hard work.”

John Mason from CEDC Mining Services says that currently women make up 17 per cent of the mining workforce in Canada.