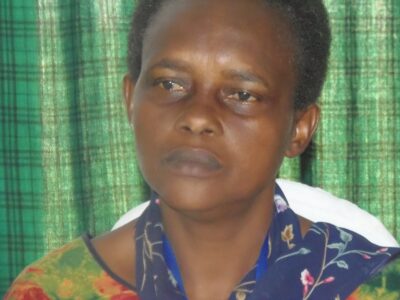 She is a long time activist of rights of Women miners.  Her passion on women’s rights and the struggles to organize women in mining to advance in the mining sector is known among most women miners in Tanzania. She is a witness of the transformation in mining sector and how it accommodates women in Tanzania. Her story as a woman miner, leader, a mother, an activist, business woman and her passion to engage and organize other women in the sector has contributed a lot to the women in mining struggles today. She is calling for the “Re-Focus” on the priorities of women in Mining Tanzania.

She is woman miner based in Tanga Region, the activist, a mother  and  Leader. She works with more than 400 women in 11 districts of Tanzania to advocate for the rights of women miners and women living in mining areas.       The election for the new chairperson will be held this year. TAWOMA needs a feminist leader, who holds the deepest of values for justice and equality. This leader will need to (1) work with women in two levels; supporting  women miners to build self-consciousness and self-esteem so that they understand and stay  on top of their challenging context (2) Linking women miners and women in mining with different resources, networks, struggles and movement so that they effect change.

The Tanzania Women Miners Association (TAWOMA) is a Non Governmental Organisation, and non-profit making. It was registered in November 1997.
The main objective of the Association is to address problems of disorganized mining, including mining related activities, economic hardships, poverty alleviation, and prevention of diseases affecting Tanzania society in general, and Women Miners and children in particular. Much has been done by the Association, in terms of organizing Women Miners, and educating them on the hazards of indiscriminate mining, and its effect to the environment. But, it has become apparent that Women Miners need to be empowered through economic means as well.
TAWOMA members, are engaged in small-scale mining of gemstones, gold, diamonds, and industrial minerals. It works towards Mobilizing, Facilitating, Engaging, Motivating and Inspiring women to fully participate in sector governance and management in Tanzania
Website 1 | Website 2 | Facebook group | email