Right under our noses; why did this not get more publicity? This is a tremendous achievement!

Professor Frances Wall has been elected as the first female president of the Mineralogical Society of Great Britain and Ireland.

Professor Wall, an Associate Professor in Applied Mineralogy at the Camborne School of Mines (CSM), will hold the prestigious post for two years. Her tenure began in earnest at a meeting of the Society’s full Council, held recently in London. 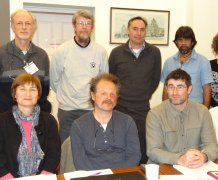 Professor Frances Wall, bottom left, at a recent meeting of the full Council of the Mineralogical Society of Great Britain and Ireland.

It is the second time that Professor Wall has been the first female to take on a prestigious lead role, following on from her recent term as Head of CSM.

Professor Wall said she was “delighted and honoured” to be selected as the president of the Mineralogical Society. She said: “I am surprised we haven’t had a woman president before – there are lots of excellent women scientists in the Society, but nevertheless it is a real honour.”

Professor Wall said there were a number of issues that the Society would face, during her tenure as president: “I believe the key issues are responding to the changing environment for academic publishing in which authors pay to publish rather than readers pay to read, making sure we have the right special interest groups to serve in fast moving areas of science, and helping members collaborate with researchers from other areas of science. I would also like to encourage more academics to take our professional membership category of Chartered Scientist”.

Professor Wall replaces Professor Jon Davidson, of the University of Durham, who served as president from 2012 – 2013.

The Mineralogical Society of Great Britain and Ireland was formed in 1876, and serves to publicise scientific knowledge of the mineral sciences in the fields of crystallography, geochemistry, petrology, environmental science and economic geology.

The Society publishes scientific journals, books and monographs, as well as organising and sponsoring scientific meetings.