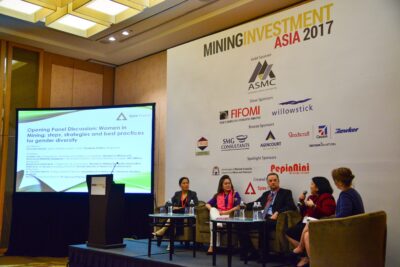 ‘Women in Mining Day’ was launched on 28 March as part of Mining Investment Asia to relook at the issue of gender diversity in the mining industry, especially within the Asia Pacific region. A macro view on this issue, in light of the 2016 announcement by BHP Billiton for 50% female workforce by 2025, was shared by Ms Yvonne Tan, HR Business Partner at BHP Billiton (Singapore) and Chairperson of the Diversity Committee at Women in Mining and Resources (WIMAR) Singapore.

Initiatives to improve the role of women in mining were also shared by speakers from the Philippines, Australia and China at panel discussions and presentations. With an audience of 50% men, ‘Women in Mining Day’ underlined the importance of close cooperation between both genders for long term progress on the issue of gender diversity.

Mining Investment Asia team would like to extend our sincere thanks to International Women in Mining (IWiM) and Women in Mining organisations from Singapore, Mongolia, Philippines and British Columbia, Canada for their support in making this inaugural ‘Women in Mining Day’ a success.