Home » News » Just 8.5% of engineers in the UK are women – the lowest representation of any European country

Just 8.5% of engineers in the UK are women – the lowest representation of any European country

Yesterday was the UK’s first National Women in Engineering Day and several events were held around the country.

National Women in Engineering Day was set up by the Women’s Engineering Society (WES) to celebrate its 95th anniversary. The aim is to celebrate the work that women do in engineering, and to showcase the great engineering careers that are available for girls. More information here.

We report on several news articles that have appeared in the press: 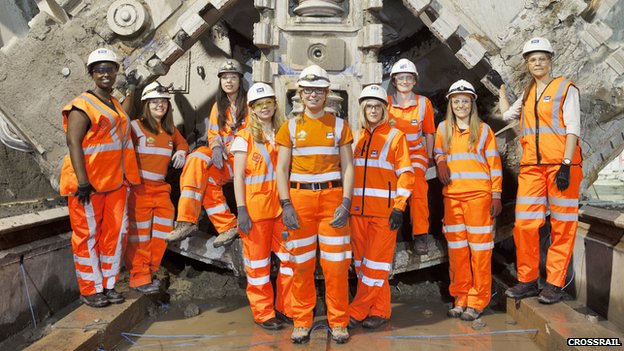 Crossrail is a £14.8bn project which will link west to east London
The gender gap in engineering urgently needs to be addressed as the industry is struggling to attract female engineers, according to Crossrail.

It said just 8.5% of engineer in the UK were women – the lowest representation of any European country. The group said the UK needed to double the number of annual university engineering graduates to 90,000 to meet the demand of one million jobs by 2020.

Future projects which need engineers include HS2 and the Thames Tideway. Crossrail said it had worked with 100 schools, reaching more than 10,000 students in the past year, to try and address the issue and attract more young people to engineering. More than 70 students aged 16-19 took part in the group’s Engineer Your Future challenge, where emerging themes included perceptions that engineering was a “man’s job”.

Meanwhile, Transport for London and London Transport Museum will play host to 400 pupils at the museum’s Acton depot this week for an Inspire Engineering Week to promote engineering as a career option. Crossrail is a £14.8bn rail scheme connecting Reading and Heathrow in the west to Shenfield and Abbey Wood in the east.

‘Girls can’t what?’ Bid to boost women in engineering 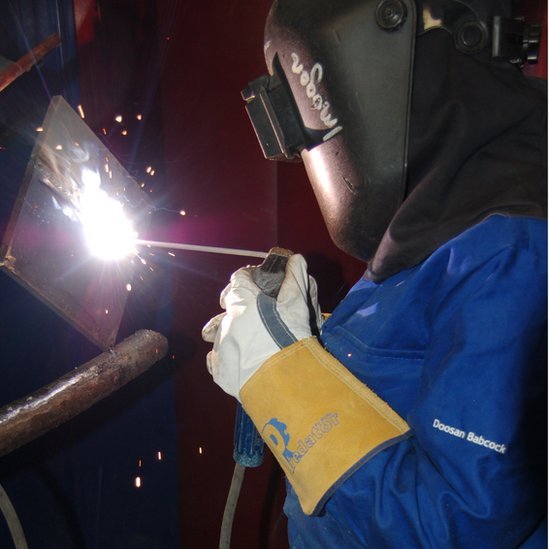 Imogen, 17, proves that girls do weld at Doosan Babcock’s welding school at Tipton

“Girls can’t what?” is the question posed on the UK’s first National Women in Engineering Day. You can be sure the answer from the organisers is not going to be “weld”.

Samantha Thompson is 24. Two years ago she bought a house. She’s about to take delivery of a brand new car. Not bad for a former part-time hairdresser who describes herself as “a nightmare child”. “I was very clever but wouldn’t apply myself. I was quite disruptive, quite mature for my age and hated being treated like a child. One teacher told me I would never amount to anything,” says Samantha of her schooldays. Samantha is now a project engineer, working to extend the life of the Heysham nuclear power station in Lancashire. She has a University of Hull foundation degree in mechanical engineering and is training to be a project manager. Hairdressing career? “Basically I tell people I install plumbing but on a massive scale.” At 16, she left school with eight fairly good GCSEs and quickly ruled out hairdressing as a career, realising there was no money in it unless she opened her own salon. 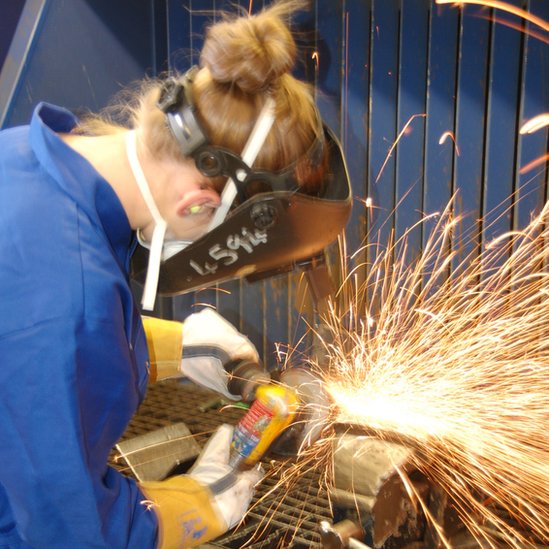 On site, people sometimes “automatically look at the bloke” – Kayleigh, 20

Her parents spotted an advert for three-year advanced apprenticeship schemes at the international energy systems company, Doosan Babcock, a big employer in her home town of Ellesmere Port. There were around 3,000 applicants for around 85 posts. Samantha made the final 250 invited to an assessment day. “I tried welding and construction pipework and then they gave me a crane and told me to drive it through a chicane – and that’s when I decided that was what I wanted to do.” At the interview she told them she wanted to be a steel erector. “They told me they had never had a girl do this before and that made me even more determined to do it.” Currently 8% of Doosan Babcock’s engineering apprentices are female but only 3% of construction engineers are women. 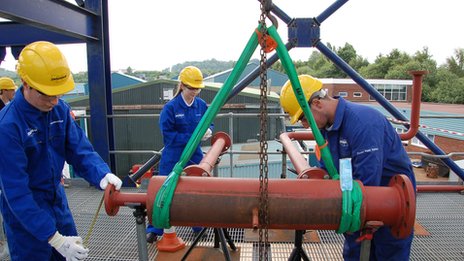 Male apprentice: “I am surprised there aren’t more girls. They’re better than me half of them”

There are more females in other branches of engineering, for example environmental engineering but women still make up only 10% of the workforce as a whole. Dawn Bonfield, executive vice-president of the Women’s Engineering Society, organisers of National Women in Engineering Day, says it’s a fantastic profession for a woman. ‘Missing out’ “It is really changing as an industry. There are really exciting opportunities to use skills creatively to solve the world’s problems. “It is really important that we start to find a way to help girls realise that there are some great career opportunities in the engineering sector that utilise the skills that they wouldn’t necessarily attribute to being important in engineering. “For example, creativity and communication skills are key to the industry and girls don’t always appreciate this. “We need people from different backgrounds, cultures and gender perspectives but at the moment we are not giving girls the choice and they are too often missing out.” 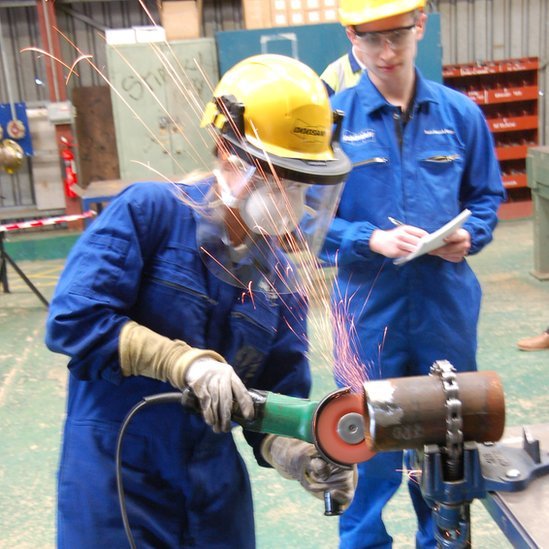 Doosan Babcock director Martyn Fletcher, who leads the company’s apprenticeship scheme, says they are actively trying to attract talented girls and to improve diversity. “We are not going to employ substandard workers just to tick boxes, we want to drive up the quality of applications from minority groups. The art of welding “As a country we are short of skills. So to restrict ourselves to a percentage of the population is not advisable. “We need to make sure we access as many skilled and talented people as we can to deliver growth across the sector.” Mr Fletcher says stories like Samantha’s prove that female apprentices can come out and be successful. She is still the company’s only female steel erector. There are more female apprentices in areas such welding and production control which is more office-based. 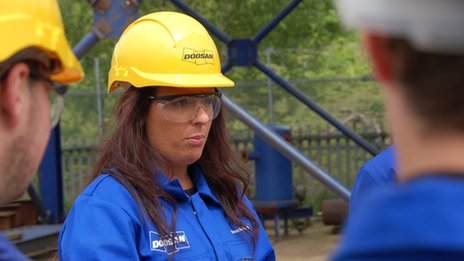 Samantha Thompson: “You know you’re not going to come out of university and have to flip burgers”

“I really did just fall into it but it’s the best decision I ever made,” says Samantha. For the first time in five years she is back at Doosan Babcock’s welding school at Tipton, West Midlands, where she did much of her training. A pep talk to a small group of current apprentices, who include several girls, focuses on their prospects. Sense of achievement “You know you’re not going to come out of university and have to flip burgers,” says Samantha. She says she never felt conspicuous or uncomfortable because of her gender – but the other two girls in her year dropped out. Apprentice welder Kayleigh, 20, says there is very little prejudice but sometimes on site people “misinterpret” her role. “They just sometimes still automatically look at the bloke… but once they know your job role they completely change and ask lots of questions about the training.” Lydia, 17, started her apprenticeship in project control but swapped to welding. “I didn’t realise how precise you have to be – how skilled it is. Everyone gets tired but I really enjoy it. “When you cap it off and it looks real shiny, you get a real sense of achievement.” Lydia says that at school she was an A and B student but was more interested in taking a practical route to a career. The male apprentices say they are surprised more girls don’t opt for engineering apprenticeships. 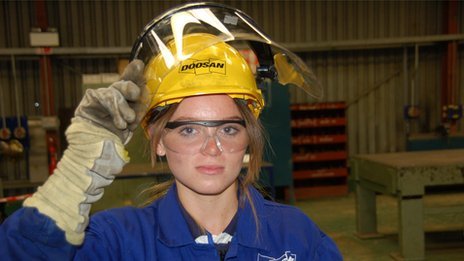 Danielle: “People say, ‘She’s from London and guess what, she’s a pipe fitter'”

“In all honesty I was surprised to see girls here when I started – but now I am surprised there aren’t more,” says one. “They’re better than me, half of them.” Eighteen-year-old Hayden thinks the girls in his A-level physics class would have enjoyed this kind of job. “I was expecting there to be more girls here.” Earning and learning Danielle, 19, from Canning Town, says people she doesn’t know are often shocked when they find out what she does for a living. “They can’t believe it whenever I go out people say, ‘She’s from London and guess what she’s a pipefitter.’ “They don’t believe it, especially when I’ve got my hair down and make-up on.” Danielle says she was “quite arty” when she was at school and almost all her school friends went to university. 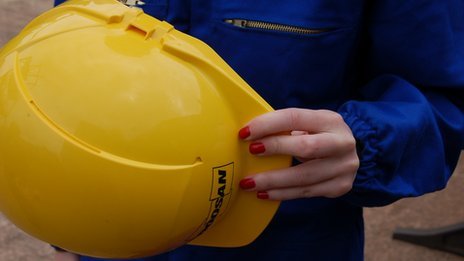 Being “quite girly” is no reason to be put off engineering, say the apprentices

“I just thought this sounded fun and I liked the idea of earning and learning.” Amy from Greenock near Glasgow describes herself as “quite girly” but that didn’t put her off. “There are a lot more boys than girls but I don’t see why girls wouldn’t be interested or want to do it.” Samantha tells the apprentices there is no reason to be scared about their prospects. “There is no recession in this sector. It’s growing. “Keep your log-books. Take advice from the charge hands and you will be amazed.”

National women in engineering day: the battle to be taken seriously, The Guardian
It’s not rocket science, but even if it was, engineers should be able to find the answer to recruiting more women into senior positions