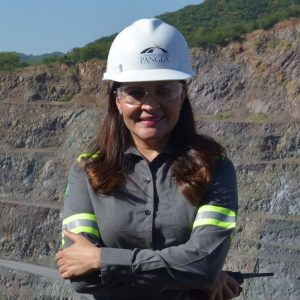 Mexican Euridice Salome González Robles is helping shape change in her country’s mining sector and is keen to get women’s voices heard and included in the debate. For her, women complement men’s activities in the workplace. With women on board, there’s not just 50% of possibilities because it’s only the men’s perspective — the world has a complete and panoramic view. But the first thing you need to do to get ahead is believe in yourself and have a desire to learn. Curiosity and a ‘can do’ attitude landed Euridice her first job in mining in 2002 and she’s never looked back. Since 2015 she’s been McEwan Mining’s country manager and director of CSR and her name crops up on a number of top lists as an influential women in Latin America. She says she’s been lucky to have been given many opportunities and support by her bosses. She’s also not afraid to say when she doesn’t know how to do something and to turn to others and nurture the talent in them. So if you are starting out she urges women to get prepared and do what you love as that’s how you will succeed. Along with mining, she manages to fit in time for singing, her Chihuahuas – Barbie and Luna, meditation and physics.

Euridice Salome González Robles is a mining woman with 15 years of experience in the industry. Ten of these have been in project management and mining exploration, ranging from analysis and business development, to project management from start-up, start-up and development. Appointed in 2007 as General Manager of Compañía Minera Pangea, she became one of the first women in Mexico with the highest executive rank in the sector.

In the middle of 2012, Eurídice González took over the position of country manager in Mexico of the operations of McEwen Mining Inc. She is the founder and President of the Mexican Mining Business Council, CONMIMEX, an institution that gathers formal mining companies in the state of Sinaloa, as well as small miners and suppliers.

In October 2016, WIM Women of Mexico became the first NGO in favor of gender equality and mining in general of the country.

She was named the second most important executive in Latin America and covered in the March 2015 edition by Latin America Business Review. She was also voted one of the 100 Global Most Inspirational Women in Mining in 2016 by WIM UK.