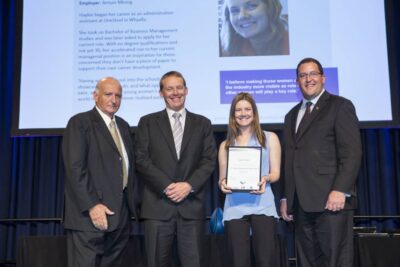 AWARDED: Hayley accepting her finalist certificate at the recent Women in Resources National Awards in Brisbane.

Arrium Mining shipping manager Hayley Perkins has been recognised for excellence – being named in the top five in the recent Women in Resources National Awards.

Responsible for managing the outer harbour operations for Arrium Mining’s Whyalla port, Hayley ensures the safe and efficient transfer of ore from the port to the export vessels, as well as being a key link in the overall logistics chain between mining and rail.

She began her career in the industry as an administration trainee, before working her way up to her current management position.

Hayley was chosen as a finalist in the ‘Exceptional Young Woman in Australian Resources’ category after impressing the judges with her efforts both in and outside of work.

“With no degree qualifications and not yet 30, her accelerated rise to her current managerial position is certainly an inspiration for those concerned they don’t have a piece of paper to support their own career development, particularly young women working within the resources sector,” the judges commented.

“Hayley is regularly involved in community projects and events, both within her own time and as part of the Arrium community support program, and is also a member of the Arrium Mining ‘Whyalla Diversity Theme Team’ – a leadership task force designed to develop and implement initiatives to improve diversity within the Arrium workforce.”

After the awards, Hayley was also honoured at a function in Adelaide hosted by SACOME, and has been congratulated by Minister for the Status of Women Gail Gago for the key role she plays in encouraging other women to be involved in the industry.

Hayley believes improving diversity is vital, and that a key to this process is ensuring women who are already in the industry become more visible as role models.

“When I first started in my traineeship, my view of the steelworks was one of dust and dirt; hard labour and harsh environments – I never expected that I would one day build a career from this industry right in my own town,” she said.

“I feel as though having women go out into the schools and showcasing what they do and what opportunities exist will open other young women’s eyes to a world they probably never realised existed without moving to a big city.”

And her advice for others out there who are new to an industry or are offered a new and challenging role?

“Just have a go! If you’re presented with an opportunity that you feel might be too far above you, push that thought aside and grab it with both hands,” she said.