Home » News » From Tarkwa to Westminister, Hilda to Churhhouse

From Tarkwa to Westminister, Hilda to Churhhouse 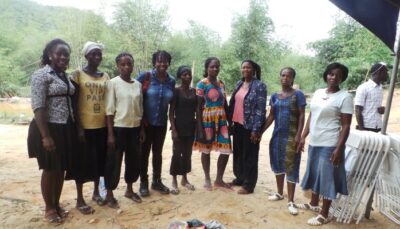 In January 2016, I participated in an IIED Action Dialogue on ASM. IIED is advocating for reforms in the Artisanal and Small Scale mining sector of Ghana and the great news in this advocacy effort is the fact that they have the support of the Mining sector as a whole: Civil Society organizations in the sector, the government agencies and Small Scale Miners.

Which reforms is the Action Dialogue looking at? Streamlining of ASM sector institutions, regulations and creating a business case to cause real transformation in the lives of people in the sector.

As part of the Action Dialogue, we undertook a two-day field trip to Tarkwa in the Western Region of Ghana and to 2 small scale mining sites as well as a Community in a catchment area. It was the best part of the whole experience. It re-enforced the fact that change is needed. There are a lot of people working in the sector, in both formal and informal situations.

Working mainly in LSM, where we complain of the low number of women, I was shocked to find so many women in the informal mining sector. They were porters, carrying heavy loads of ore on their head; they are washers; they carry water; they pound the ore; they do the odd jobs. They were at the very bottom in the artisanal and small-scale mining chain, and yet provide important services within the chain.
Most of them have little or no formal education; they enter largely unskilled, and many were dirt poor, literally…dripping in mud, covered with grime, coated in grit.

The women, most of whom are below the age of 40, told me/us that these jobs were giving them a life-line to survive, to pay for the children’s education, health care & put food in the pot for their families.
Informal and small-scale miners also create an avenue for small businesses in the communities; for example, food & water vending, laundry services, rental of spare rooms, grocery shops and related supporting services.
How did they find themselves in these jobs? Some said “they had been neglected by their husbands.” Some had lost their parents early and had to fend for themselves and siblings; and for others, their husbands had been laid off from the Large Scale Mines and they had run out of cash.
One said: “This job is a means to an end. I am trying to save money to learn a trade.” Whatever the reasons, the Informal Mining sector is offering these women a lifeline.

But there are risks. They don’t always get even the little they’re entitled do. Sometimes they get cheated. They would work but the bosses wouldn’t pay them, yet they have no one to complain to. In addition, they often work under unsafe conditions, with inadequate sanitary facilities. Besides, some of the mothers in the community were concerned that the comparative affluence of the male miners encouraged social vices such as smoking, drug abuse and promiscuity in the communities and they were unhappy about them.

The best part of the field trip was visiting a Local Small Scale mine that had employed a female mining engineering graduate of the University of Mines on their mine. Not only that, there was manifestation of career progression, as one of their female workers had graduated to the position of Lead Miner! We left that particular site with hope and conviction that with policy advocacy, community encouragement and a bit of external push, women will rise from the bottom of the pit, cleanse themselves of the mud and the disrespect to positions of enlightenment and leadership in mining.

Fast forward to Westminister; The EVENT: What place for the informal economy in green and inclusive growth? This event reinforced the need and the haste required for action, transformation and implementation of the Road Map initiated by the IIED and it’s Learning and Leadership Group. Discussions with other participants from other sectors especially participants from Forestry and Agriculture also raised the importance of cross sector networking as a lot of the issues were similar. I also took away from the Informal Economy event that some of the cross sector issues that needed to be formally addressed were Land titles or rentals, Health & Safety, Environmental and Cultural heritage regulations.