Women Matter 3: Women leaders, a competitive edge in and after the crisis

Home » Reports » Women Matter 3: Women leaders, a competitive edge in and after the crisis 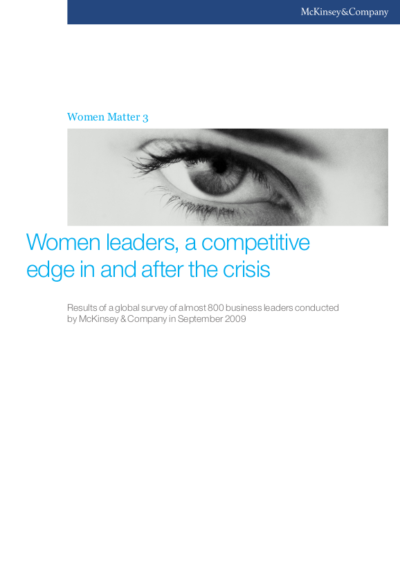 In 2007, McKinsey & Company published Women Matter: Gender diversity, a corporate performance driver. This report demonstrated a correlation between a company’s performance and the proportion of women serving on its executive board. In Women Matter 2, published in 2008, we identified some of the reasons for this “performance effect” by examining the leadership behaviors that women leaders adopt more frequently than men leaders. In 2009, for Women Matter 3, our aim was to understand how gender diversity in companies was evolving – how the global economic crisis might have affected the programs and priorities of female executive development – and to identify whether the leadership behaviors more often adopted by women were still appropriate in times of crisis and beyond.
Download report
Visit Website
View Source