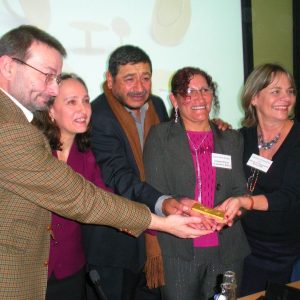 Look at any activity you are involved in and ask: who has access to the benefits?

Colombian Cristina Echavarria has been an advisor working in mining and sustainability challenges since the 1990s. Plain speaking and outspoken, she says the mining sector likes this and she’s never adapted to fit into the industry. Her work has focused on communities and on artisanal and small-scale mining – she was instrumental in creating the Fairmined gold certification. She’s also been involved in governance of decision making and tracking quality of life impacts around large scale mining projects. Her passion is social and environmental justice and to support small-scale miners, especially women, who have been invisible for years, suffering discrimination and violence as they scraped out a living. A strong believer in having more women on boards, she thinks there are enough women to fill these posts and believes the time is right for quotas.

Cristina is an independent researcher, practitioner and advisor on mining and communities, artisanal and small-scale mining, and ethnic groups. Her work focuses on participatory natural resource management, with emphasis on the social, environmental and governance dimensions of the sustainable development of mineral rich regions. Cristina has over 35 years of experience in grassroots community development, social research and administration of research for development programmes. She is a director of the Alliance for Responsible Mining (ARM, creator of Fairmined certification), Senior Fellow of the Institute of Regional Studies of the University of Antioquia (Colombia), Industry Fellow at the Sustainable Minerals Institute, University of Queensland (Australia), and an independent member of BHP Billiton’s Forum on Corporate Responsibility. Cristina is now working with WWF Colombia and Afro Colombian communities to develop a Best Practice Guide to Mining in the highly diverse Pacific region of Colombia, building on ancestral mining practices.