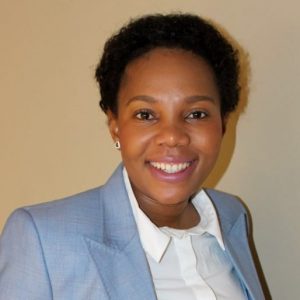 The sky’s not the limit, your mind’s the limit… Success is in the palm of your hands

South African, Zandile Buthelesi, is General Manager Projects at African Exploration Mining and Finance Corp. Her motto is: “if you are somewhere that does not serve your purpose then you leave and you go and find it somewhere else”. This is something she has done in her career. A passionate advocate of women in mining, she believes that for young women starting up, you need role models and someone to hold your hand, to understand that this path is walked on and that is something that you can do. She wants to encourage women to network and to take control of their careers, because she says no one else is going to do it for you. She wants to challenge stereotypes over what you should say, how you should behave and what you should look like to work in mining.

Zandile Buthelezi is the General Manager: Projects at African Exploration Mining and Finance Corporation, South Africa. She obtained her BSc Geology Honours degree at University of Witwatersrand and is studying towards obtaining her MBA with Wits Business School.

In 2006 Zandile joined Anglo Coal (now called Anglo American) as its Senior Geologist. In 2008 she joined Xstrata Coal (now called Glencore) as its Divisional Geologist where she managed the geology department at SouthStock complex (which had three underground mines South Witbank, Tavistock and 5 seam UG operations). Zandile was responsible for monthly reconciliations of quality mined, training and development of the grade controller who was reporting to her. She was also responsible for the drilling contracts, planning the exploration progamme and making sure they adhered to Xstrata’s Safety procedures and policies.

She then joined African Exploration Mining and Finance Corporation as its Chief Geologist where she was promoted to her current role as General Manager.

A fervent advocate of the value of professional and learned societies, Zandile is also a member of the South African Council for Natural Scientist Professions.