Peter Gentry, shift 3 Supervisor pictured here with the majority of his shift is
leading the way in championing diversity within the furnace teams. The
furnace is an environment that is hot and physical, undertaking the majority of
the molten metal handling on site, which many thought would be one of the
last areas on-site to move away from being 100% male-dominated. His values
of positive attitude, team work and a can-do approach over traditional mining
experience has led to a significant culture change with his shift and a team
that is now a quarter female.
Home » Interviews » Saken Ashirbekova 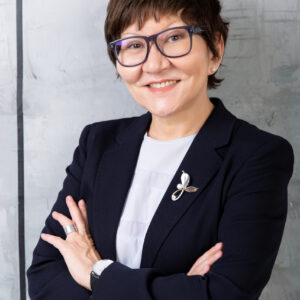 “Take every experience that is offered to you in your work – try never to turn down an opportunity, no matter how daunting it may seem at first. You never know what exactly will help you in future.”

As one of the most senior women in the Kazak mining industry, Saken Ashirbekova has an impressive track record of successful project development, operations management, and business strategy. Her professional roles have included responsibilities as varied as technical, project, legal, contract, and human resource management, through to government/ministerial liaison, facilitation of transfer of company ownership, and as General Director of two major mining operations. Her ability to think and act decisively and strategically, while maintaining a pragmatic perspective and nurturing long-term partnerships has opened doors to many opportunities in her 25-year career.