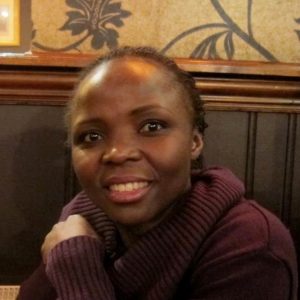 Don’t assume or imagine why someone would not want to talk to you, bite the bullet and go and ask.

Ugandan Mine geologist Ngonzi Kiiza has proven herself to be resilient to whatever challenges have been put in her way. For her, xenophobia, racism and gender intolerance are a reality in the mining industry but you should not give them too much face time. “Once you identify it deal with it, confront it or walk away.” She left the industry for eight years bowed but not beaten and at a fleeting meeting with Anglo’s then CEO, Cynthia Carroll, secured herself a job. She is passionate about the possibilities her work presents and being in a position to makes sense of the chaos. She also sees it as her responsibility to help the young people in South Africa where she works.

I began my mining industry journey at MAKERERE UNIVERSITY, Kampala, Uganda and gained a Bachelor of Science Degree in 1996 majoring Focus: Chemistry, Geology, Physics and ancillary Math. I then started working in 1996 working as a gold exploration geologist based in Kabong, northern Uganda. After which l qualified for an MSc at the International Institute for Aerospace Survey and Earth Sciences, ITC, the Netherlands, under the Netherlands Fellowship Program. I spent two years in the Netherlands, where l achieved my MSc in Mineral Exploration. After my Masters l headed for England and spent eight years working within the public and voluntary sector managing and administering social projects.

In 2007 I returned to the mining sector and began work as a Senior Geologist with Anglo American Thermal Coal division in Witbank, South Africa and I later became a Coal Resource Geologist. In 2014 l left to join Petmin’s Tendele coal mine based at their Somkhele colliery in Kwa Zulu Natal, South Africa, where l am working as the mine geologist and l oversee the geological structural impact on the coaling process.

I am now doing an online MBA in sustainable energy with the University of Cumbria with the aim of becoming part of the energy dialogue in Africa. I also want to be able to get employment outside the actual field to be part of asset management strategy and planning.