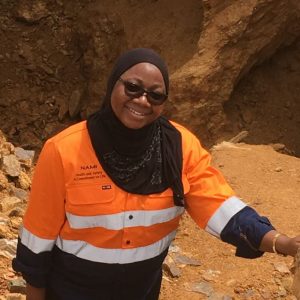 Nothing is impossible; just start, trust in your potential and it will happen

President of Women in Mining at Newcrest Ivory Coast and a member of WIM Ivory Coast, Naminata Kramoko believes that respect for people, having family support and being determined are crucial to achieving your goals. The business support and database superintendent at Newcrest Exploration has risen speedily through the ranks, seizing every opportunity put her way, while juggling her studies and a young family. Her next stop is Australia. Naminata feels that she is treated as an equal within the male dominated workforce, but initially noticed that nobody listened to her because she was a woman. Things have changed. She tells other women to trust their judgement and not be influenced by others. She says that she’s realised that nothing is impossible. You just need to start trusting in your judgement and then things will happen. As a woman in the mining industry which is dominated by men, sexual harassment has been a significant concern and she would have liked someone to have told her about this before she embarked on her career. She’s now giving advice to all her women trainees and new employees on this. An advocate of women in mining and WIM groups, she says nothing can be changed if we don’t trust and believe.

Naminata Kramoko was born in Anyama, a small town around Abidjan, Ivory Coast in April 1985. I have 10 brothers and sisters from one father and two mothers. After my baccalaureate, I moved to Yamoussoukro, where I gained my mining diploma in three years and then went on to become an Engineer in Mining and Geology while I was working. I married Karamoko Mamadou in January 2007 when I was 22 years old and still a student. We have two lovely kids: Hassan, five years old and Rahma, almost three years old. I started working at Newcrest in August 2008. I love working with this company because they have good career plans for their employees. I have had a number of positions from initially starting as a laboratory chemist until now where I’m working as a Business Support and Database Superintendent.