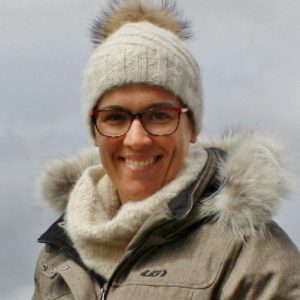 Job title (at time of interview)Geologist

Don’t give up. Things don’t fall into your lap, you have to go and get them!

Canadian Karine Cliche’s energy and enthusiasm are palpable and she’s not about to give up. A mining geologist, she’s leaving the sector for now having battled with the ups and down of the industry’s hard financial times and an inability to get the job she wants. She’s faced a number of rejections but Karine remains passionate about mining and it’s lack of frontiers, human connections and ability to see and learn about new places. Although she is changing careers, she says she will keep looking for jobs and be prepared to jump on board if things happen. A mother of two young children, finding the right job can be tough and she says she’s not taking this latest venture setting up her own business as a failure but as a huge curve.

Karine Cliche is a geologist with a Bachelor degree in Earth & Planetary Science and a Masters in Mining Geology. Karine has worked as an exploration geologist in Canada and the Democratic Republic of Congo. She loves mining work for its diversity and its opportunity and is hoping to be back in the industry soon. Now, she is the mother of two little boys and she is in the process of opening her own home inspection business.