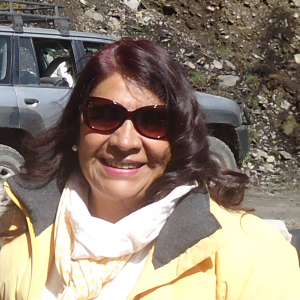 You have to be a fighter!

For over 40 years Ana Maria Aranibar has been involved in the mining sector in Bolivia, sharing information, creating networks and building communities. She started out in the state sector in communications and rose through the ranks. Then 20 years ago she created her consultancy which is dedicated to pursuing social and corporate responsibility. She has shone a light on the often underreported and underrepresented female miners, particularly those involved in small-scale mining, who continue to suffer violence and discrimination. She’s keen to pass on her knowledge and get Bolivian universities to incorporate a technical module on responsible mining.

She is the Managing Director of consultancy CUMBRE DEL SAJAMA S.A. in Bolivia, which is dedicated to strengthening social and environmental programmes in the mining industry at a national and international level.

She’s a lead member of the Consejo Directivo del Organismo Latinoamericano de Minería and since 1985 she’s been the Secretary General of the Latin American Mining organism “OLAMI-Bolivia”.

Anna Maria’s the President of the Business Women’s Association of Bolivia.

She’s the coordinator of the Latin American Women’s Mining Network as well as being an active member of the national women in mining network.

She is also an author and writer and has organised a number of national and international congresses.