Rosey Perkins, Field Gemologist and Gemological Journalist
A mother shows her daughter how to sieve for sapphires in
the river at Ilakaka, Madagascar. Two decades after the start
of the sapphire rush here, most families rely on the sapphire
trade for a living. September 2016
Home » Our Work » WIM Champion » WIM Organisations » Behind the WIM Acronym

BEHIND THE “WIM” ACRONYM

It is vital that women’s individual and collective voice be heard for the industry to improve in diversity, governance and sustainability. Women in Mining (WIM) organisations play an essential role by bringing women and stakeholders together, supporting diversity and being the voice of women in mining in regional and national initiatives. 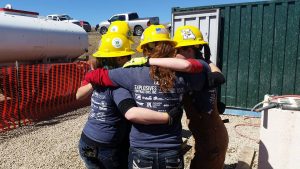 There are a multitude of organisations primarily focused on progressing the interests of women who work in, around and with the mining sector, on every continent: all count as WIM organisations and can access the resources, support and network of IWiM.

Although they will all share a common vision, their objectives and forms vary: WIM organisations mostly evolve organically and are structured, managed and financed in accordance with their member composition, location, context and purpose; most are independent but welcome coordination and joint initiatives; there can be several in a single country, not necessarily linked to one another; some include male members or supporters; some are organised under the umbrella of an industry association or a business; and their number fluctuates as some appear and others are dissolved or become inactive.

IWiM and other WIM organisations take a very inclusive view of “women in mining”, considering that this encompasses any women working in, around or with the mining sector, including professionals in the industrial mining sector (large-scale mining or LSM), owners and operators of artisanal and small-scale mining operations (ASM), professionals in associated and supporting industries including technical and professional services, regulators and government officials, academics or representatives of civil society organisations and movements, particularly those impacted by mining.

Types of Women in Mining organisations we know of:

Are you a researcher?